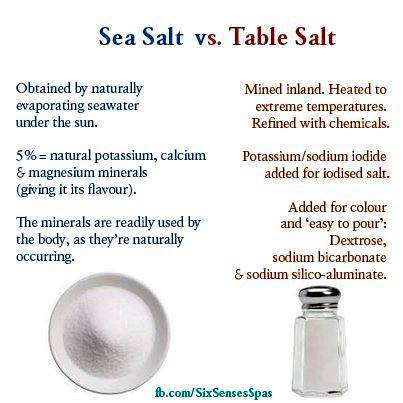 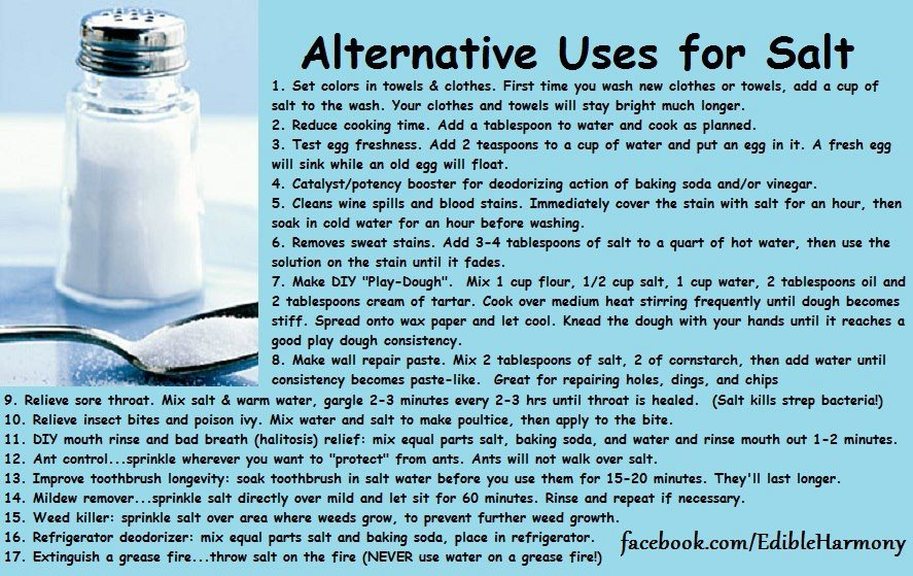 Thankyourbody.com/is-salt-bad-for-you
Start by checking the label. You’d be surprised how many expensive “sea salts” are still full of additives.
If you see a bunch of other ingredients, like anti-caking agents or sugar,
definitely avoid it. Remember, you don’t want any extra stuff added in.
You also don’t want any stuff taken out. Real salt should have all its minerals in tact.
This means that real salt rarely resembles
the white and perfectly uniform crystals.
My favorite salt has a spectrum of colors from pink to gray. It’s full of mineral goodness,
and I have noticed a tremendous benefit to my health by getting more real salt into my diet.
(And did I mention how good it tastes?)
So yeah. Stripped and chemical salt is bad.  But real salt is very, very good.
[It’s “made” just the way God intended it]

Does the Salt You Choose Really Make a Difference?
Wildhealthfood.com/unprocessed-sea-salt 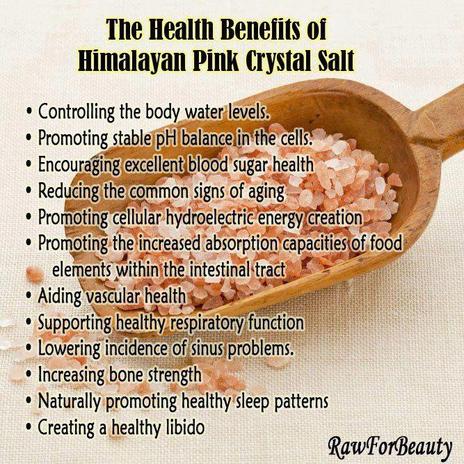 check to be sure the salt purchased is truly natural and not a scam
Dr Mercola.com/It's time to end-war-on-salt
For many decades now, policy makers have been attempting to get us to eat less salt.
But the drive to do this has little basis in science.

In fact, a recent meta-analysis by the Cochrane Review
involving a total of 6,250 subjects found no strong evidence
that cutting salt intake reduces the risk for heart attacks, strokes or death.1

Another study published last year found that lower salt consumption
actually increased your risk of death from heart disease.2
A review of the available research reveals that much of the science
behind the supposed link between salt and high blood pressure is dubious at best.

According to Scientific American:3
"Intersalt, a large study published in 19884, compared sodium intake with
blood pressure in subjects from 52 international research centers
and found no relationship between sodium intake and the prevalence of hypertension.

In fact, the population that ate the most salt, about 14 grams a day,
had a lower median blood pressure than the population that ate the least, about 7.2 grams a day...
Studies that have explored the direct relationship between salt and heart disease have not fared much better...
For every study that suggests that salt is unhealthy, another does not."
Himalayancrystalsalt.com 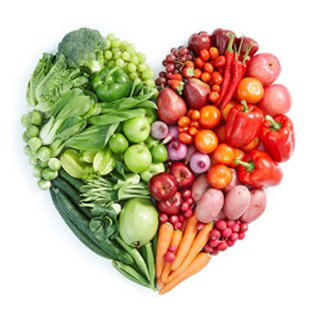 The Tenuous Link Between Salt and Heart Disease
Melinda Moyer, writing for Scientific American,
points out that the evidence linking salt to high blood pressure and heart disease
has always been on the flimsy side, stating:5

"Fears over salt first surfaced more than a century ago.
In 1904 French doctors reported that six of their subjects who had high blood pressure--
a known risk factor for heart disease—were salt fiends.
Worries escalated in the 1970s when Brookhaven National Laboratory's Lewis Dahl claimed that he had "unequivocal" evidence that salt causes hypertension:
he induced high blood pressure in rats by feeding them the human equivalent of 500 grams of sodium a day.
(Today the average American consumes 3.4 grams of sodium, or 8.5 grams of salt, a day.)

Dahl also discovered population trends that continue to be cited as strong evidence
of a link between salt intake and high blood pressure.
People living in countries with a high salt consumption--
such as Japan—also tend to have high blood pressure and more strokes.

But as a paper pointed out several years later in the American Journal of Hypertension,
scientists had little luck finding such associations when they compared sodium intakes within populations,
which suggested that genetics or other cultural factors might be the culprit.
Nevertheless, in 1977 the U.S. Senate's Select Committee on Nutrition and Human Needs released a report recommending that Americans cut their salt intake by 50 to 85 percent,
based largely on Dahl's work."

This is certainly not the first time a stubborn dogmatic belief has grown out of a hypothesis
that later turned out to be incorrect.
The same applies to the saturated-fat-is-bad-for-your-heart myth, which is based on cherry-picked data…
Since the days of Lewis Dahl, a long list of studies has failed to prove ANY benefits of a low-salt diet,
and in fact many tend to show the opposite.
In addition to the ones already mentioned above,
the following studies also came up with negative results:

For an even more comprehensive list of research, please see this previous article. 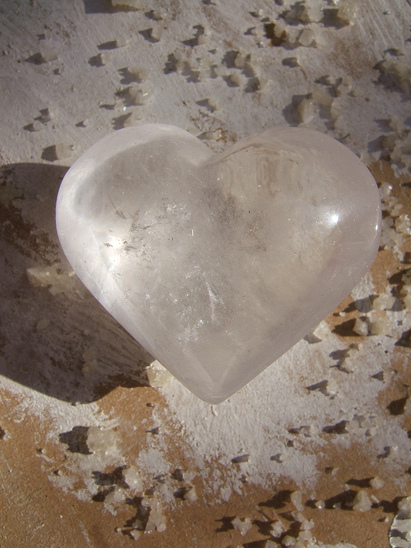 Not All Salt is Created Equal
Not only is salt relatively benign, it's actually a nutritional goldmine,
IF you consume the right kind.
Modern table salt has very little in common with natural, unrefined salt.
The first will damage you health while the latter is profoundly healing.
Here's a quick break-down of their basic ingredients: 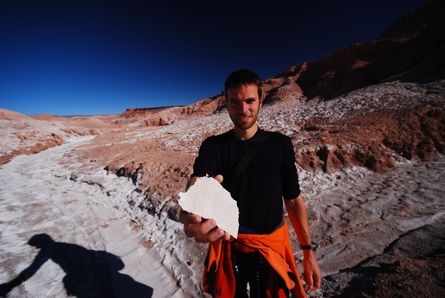 The Healing Benefits of Unrefined Natural Salt
Being a major component of your blood plasma, lymphatic fluid, extracellular fluid, and even amniotic fluidCarrying nutrients into and out of your cells, and helping maintain your acid-base balance
Increasing the glial cells in your brain, which are responsible for creative thinking and long-term planning.
Both sodium and chloride are also necessary for the firing of neurons
Maintain and help regulate blood pressure
Helping your brain communicate with your muscles,
so that you can move on demand via sodium-potassium ion exchange
Supporting the function of you adrenal glands, which produce dozens of vital hormones
Unrefined natural salt is important to many biological processes, however, for every gram of excess sodium chloride that your body has to neutralize, it uses up 23 grams of cellular water.
Hence, eating too much common processed salt will cause fluid to accumulate in your tissues,
which may contribute to: 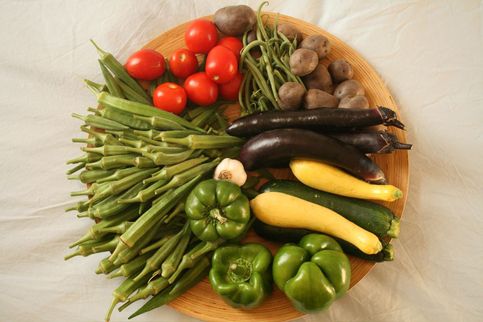 The Importance of Maintaining Sodium-Potassium Ratio
While natural unprocessed salt has many health benefits and is indeed essential for life,
that does not mean you should ingest it with impunity.
Another important factor is the potassium to sodium ratio of your diet.
Imbalance in this ratio can not only lead to hypertension (high blood pressure)
but also contribute to a number of other diseases, including:

Heart disease and stroke
Memory decline
Osteoporosis
Ulcers and stomach cancer
Kidney stones
Cataracts
Erectile dysfunction
Rheumatoid arthritis
The easiest way to achieve this imbalance is by consuming a diet of processed foods,
which are notoriously low in potassium while high in sodium…
According to a 1985 article in The New England Journal of Medicine, titled "Paleolithic Nutrition,"
our ancestors got about 11,000 mg of potassium a day, and about 700 mg of sodium.10
This equates to a potassium over sodium factor of nearly 16.
Compare that to today's modern diet where daily potassium consumption averages about 2,500 mg
(the RDA is 4,700 mg/day), along with 4,000 mg of sodium…
If you eat a diet of processed foods, you can be virtually guaranteed
that your potassium-sodium ratio is upside-down.

This may also explain why high-sodium diets appear to affect some people but not others.
According to a recent federal study into sodium and potassium intake, those at greatest risk of cardiovascular disease were those who got too much sodium along with too little potassium.
The research, published in the Archives of Internal Medicine in July of last year11,
was one of the first and largest U.S. studies to evaluate the relationship of salt, potassium and heart disease deaths.

Mike Stobbe reported on the study in an article for the Huffington Post:12

"If you have too much sodium and too little potassium, it's worse than either one on its own," said Dr. Thomas Farley, New York City's health commissioner, who has led efforts to get the public to eat less salt…
"Potassium may neutralize the heart-damaging effects of salt," said Dr. Elena Kuklina,
one of the study's authors at the Centers for Disease Control and Prevention…
The research found people who eat a lot of salt and very little potassium
were more than twice as likely to die from a heart attack as those who ate about equal amounts of both nutrients. Such a dietary imbalance posed a greater risk than simply eating too much salt, according to the study."

So, how do you ensure you get these two important nutrients in more appropriate ratios?
Ditch processed foods, which are very high in processed salt and low in potassium and other essential nutrients,
and eat a diet of whole, unprocessed foods, ideally organically-grown to ensure optimal nutrient content.
This type of diet will naturally provide much larger amounts of potassium in relation to sodium.

About 90 percent of the money Americans spend on food
is spent on processed foods and more than 75 percent of the sodium
in the U.S. diet comes from processed foods, so it's easy to see how this kind of diet
can lead to lopsided sodium-potassium ratios.
Emerging evidence suggests that this ratio is actually crucial for improving health,
and the way to optimize potassium intake is by increasing consumption of vegetables,
which are the highest sources of potassium.
Dr Mercola.com/end-war-on-salt 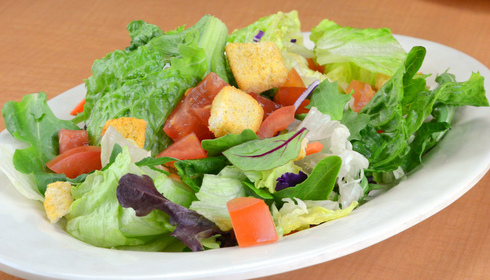 Why You Need Potassium…
Your body needs potassium to maintain proper pH levels in your body fluids,
and it also plays an integral role in helping regulate your blood pressure.
It is possible that potassium deficiency may be more responsible for hypertension,
rather than excess sodium, as it also affects your:
Bone mass
Potassium deficiency can lead to electrolyte imbalance,
and can result in a condition called hypokalemia.

Symptoms include:
Potassium-Rich Foods
I do not advise taking potassium supplements to correct a sodium-potassium imbalance.
Instead, it is best to alter your diet and incorporate more potassium-rich whole foods.
Some of the richest sources in potassium are:

Other potassium-rich fruits and vegetables include: 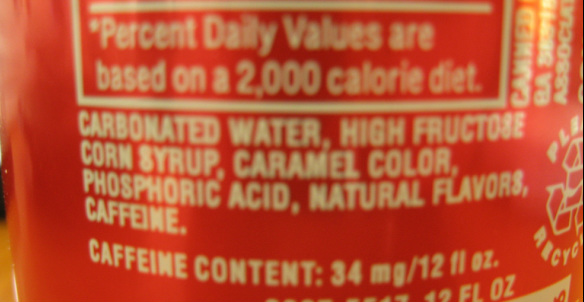 whatever this is, it's a dead product, toxic for the body
Fructose--
Far More Likely Culprit in Hypertension and Heart Disease
Avoiding processed foods will help avoid another primary risk factor
for high blood pressure and heart disease, namely fructose.
Check the labels, and find that virtually every single food and beverage
you contemplate buying contains fructose,
either in the form of high fructose corn syrup, corn syrup, or some other version.
The amounts of salt Americans consume pales in comparison to the amount of fructose eaten on a daily basis,
and I'm convinced that it's the sugar/fructose consumption
that is the major driving force behind our skyrocketing hypertension rates, not excess salt.

The connecting link between fructose consumption and hypertension
lies in the uric acid produced.
Uric acid is a byproduct of fructose metabolism, and increased uric acid levels
effectively drive up your blood pressure.

The more you can move toward a diet of whole organic foods in their natural state,
the healthier you'll be. And given that salt is essential to good health,

Himalayan salt is completely pure, having spent many thousands of years maturing under extreme tectonic pressure, far away from impurities, so it isn't polluted with the heavy metals and industrial toxins of today.
It's hand-mined, hand-washed, and minimally processed, and contains some 84 different trace minerals.
It's likely to be the most delicious salt you'll ever find,
which is why it's so popular among gourmet chefs.
Relax, and Salt to Taste… but use a natural unrefined salt.
.Dr mercola.com/2010/03/13/richard-johnson-interview 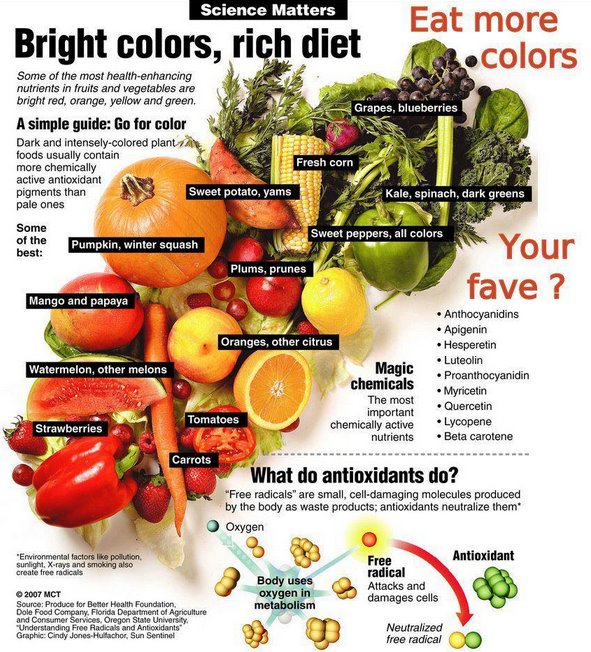