When the Vietnam conflict broke out, the son went to war.
He was very courageous and died in battle while rescuing another soldier.
The father was notified and grieved deeply for his only son.

About a month later, just before Christmas, there was a knock at the door.
A young man stood at the door with a large package in his hands..

He said, 'Sir, you don't know me,
but I am the soldier for whom your son gave his life.
He saved many lives that day, and he was carrying me to safety
when a bullet struck him in the heart and he died instantly...
He often talked about you, and your love for art.' The young man held out a package.
'I know this isn't much. I'm not really a great artist,
but I think your son would have wanted you to have this.'
The father opened the package. 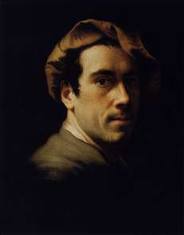 by-Christian-Seybold
It was a portrait of his son, painted by the young man.
He stared in awe at the way the soldier had captured the personality of his son in the painting.
The father was so drawn to the eyes that his own eyes welled up with tears.
He thanked the young man and offered to pay him for the picture..
'Oh, no sir, I could never repay what your son did for me.
It's a gift.'

After the soldier had departed, the old man set about
hanging the painting went above the fireplace, pushing aside thousands of dollars of paintings.
And then the man sat in his chair and spent Christmas gazing at the gift he had been given.
Every time visitors came to his home he took them to see the portrait of his son
before he showed them any of the other great works he had collected.

The following spring, the old man became ill and passed away.
The art world was in high anticipation! According to the will of the old man, all of the art would be auctioned on Christmas day, the day he had received his greatest gift.

The day soon arrived and art collectors from around the world gathered
to bid on some of the world’s most spectacular paintings.
Dreams would be fulfilled this day; greatness would be achieved as many would claim
“I have the greatest collection.”

The auction began with a painting that was not on any museum’s list.
It was the painting of the man’s son.The auctioneer pounded his gavel. and asked for an opening bid.
Who will bid for this picture?'
The room was silent. “Who will open the bidding with $100?” he asked.
Minutes passed. No one spoke. 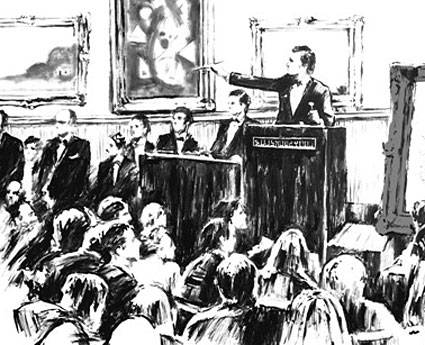 There was silence...Then from the back of the room came,
“Who cares about that painting? It’s just a picture of his son.
Let’s forget it and go on to the truly valuable items.”
More voices echoed in agreement.

“No, we have to sell this one first,” replied the auctioneer. “Now, who will take the son?”
Then a voice in the back of the room shouted, 'We want to see the famous paintings.
Skip this one.'
But the auctioneer persisted. 'Will somebody bid for this painting?
Who will start the bidding? $100, $200?'

Another voice angrily called out. 'We didn't come to see this painting.
We came to see the Van Gogh's, the Rembrandts. Get on with the Real bids!'
But still the auctioneer continued.
'The son! The son! Who'll take the son?' 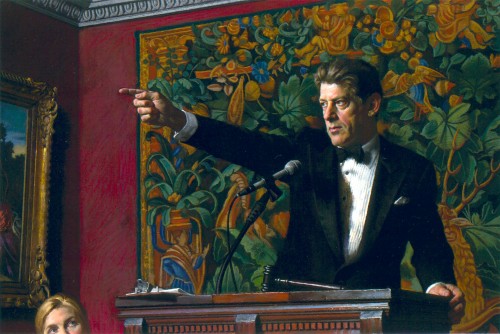 DanielGreeneartist.com/auction
Finally, a voice came from the very back of the room.
It was the longtime gardener of the man and his son.
'I'll give $10 for the painting. That’s all I have.
I know the son, so I’d like to have it.

The crowd was becoming angry.
'Give it to him for $10. Let's see the masters.'
They didn't want the picture of the son.
They wanted the more worthy art work.

The auctioneer pounded the gavel.. After more silence, the auctioneer said,
'Going once, twice, Gone. SOLD for $10!'
Cheers filled the room and someone exclaimed,
“Now we can get on with it and we can bid on these great treasures!”
The auctioneer laid down his gavel. 'I'm sorry, the auction is over.' 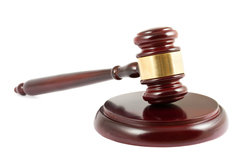 Stunned disbelief quieted the room. Someone spoke up and asked,
“What do you mean it’s over? What about all of these paintings? There are millions of dollars of art here!
We demand that you explain what’s going on!”
'What about the paintings?'

'I am sorry. When I was called to conduct this auction,
I was told of a stipulation in the will... I was not allowed to reveal that stipulation until this time.
Only the painting of the son would be auctioned.
Whoever bought that painting would inherit the entire estate, including the paintings.
“It’s very simple,” the auctioneer replied. “According to the will of the father,
whoever takes the son . . . gets it all.”

God gave His son to die on the Cross. Much like the auctioneer,
His message today is: 'The Son, the Son, who'll take the Son?'
Because you see,
whoever takes the Son gets everything.
~unknown
“He that spared not his own Son, but delivered him up for us all,
how shall he not with him also freely give us all things?”
(Romans 8:32)
"But as many as received Him, to them gave He Power to become the sons of God,
even to them that believe on His Name"
(John 1:12). 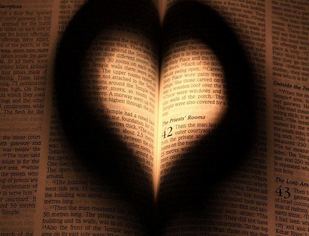 The Graduation Gift
A young man was getting ready to graduate from college.
For many months he had admired a beautiful sports car in a dealer's showroom,
and knowing his father could well afford it,
he told him that was all he wanted.

As Graduation Day approached,
the young man awaited signs that his father had purchased the car.
Finally, on the morning of his graduation,
his father called him into his private study.

His father told him how proud he was to have such a fine son,
and told him how much he loved him.
He handed his son a beautiful wrapped gift box.

Curious, but somewhat disappointed, the young man opened the box
and found a lovely, leather-bound Bible,
with the young man's name embossed in gold.
Angrily, he raised his voice to his father and said,
"With all your money you give me a Bible?"
He dropped it on the desk and stormed out of the house.

Many years passed and the young man was very successful in business.
He had a beautiful home and wonderful family, but realized his father was very old,
and thought perhaps he should go visit him.
He had not seen him since that graduation day.
Before he could make arrangements,
he received a telegram telling him his father had passed away,
and willed all of his possessions to his son.

When he arrived at his father's house, sudden
sadness and regret filled his heart.
He began to search through his father's important papers and saw the still new Bible,
just as he had left it years ago.
With tears, he opened the Bible and began to turn the pages.
His father had carefully underlined a verse,

As he read those words, a car key dropped from the back of the Bible.
It had a tag with the dealer's name,
the same dealer who had the sports car he had desired.
On the tag was the date of his graduation, and the words...
PAID IN FULL
♥♥♥
Might we miss finding God's gift
because we are not looking for eternal love? 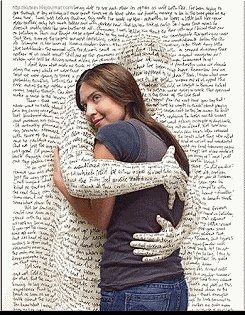 The Living Word
I was regretting the past and fearing the future.
Suddenly my LORD was speaking.
"My name is I AM."

He paused. I waited.
He continued, "When you live in the past,
with its mistakes and regrets,
it is hard.
I AM not there.
My name is not I was.

When you live in the future,
with its problems and fears,
it is hard.
I AM not there.
My name is not I will be.

When you live in this moment,
it is not hard.
I AM here.
My name is I AM." 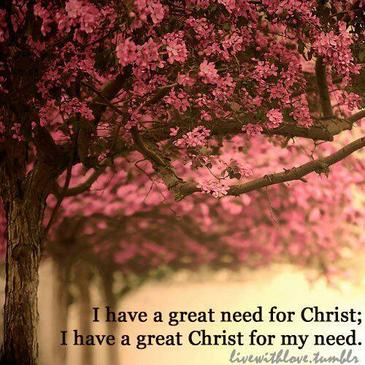