Disinfectant cleanser that works best
for kitchen counters, cutting boards, taps, floors, toilets, bathrooms and hands.
3% hydrogen peroxide
and vinegar.
Put each liquid into a separate spray bottle,
then spray with one, followed by the other.
For vegetables and fruit, spray with vinegar and hydrogen peroxide, then rinse under running water.
It doesn't matter which you use first -
there is no taste of vinegar or hydrogen peroxide,
and neither is toxic
Dr Mercola.com/vinegar & HP disinfectant
Realfarmacy.com/20-benefits-and-uses-for-hydrogen-peroxide
The Risk of Chemical Disinfectants

When disinfectants are used in low levels,
researchers found that they actually make certain bacteria stronger and resistant to antibiotic treatment.
This is true even in hospital settings,
and certainly applies to the low-level disinfectants used in homes.

While building up antibiotic-resistance and thereby contributing to the creation of superbugs,
chemical disinfectants disrupt the balance of bacteria, both good and bad, in your home,
making it much easier for the bad bacteria to flourish.

Meanwhile, the chemicals themselves are toxic in their own right.
For instance Lister’s carbolic acid, now known as phenol,
is a common main ingredient in household detergents like Lysol, Pine-Sol and Spic-n-Span.
It’s also found in mouthwash.

Phenol is toxic and people who are hypersensitive can experience serious side effects at very low levels.
Studies have linked phenols to:

• Damage to your respiratory and circulatory systems
• Heart damage
• Respiratory problems
• Damage to your liver, kidneys and eyes
• Nonyl phenol ethoxylate, a common ingredient in laundry detergents and all-purpose cleaners,
is banned in Europe, and biodegrades slowly into even more toxic compounds

Other chemicals found in household disinfectants include:

• Formaldehyde, found in spray and wick deodorizers, which is a suspected carcinogen
• Petroleum solvents in floor cleaners may damage mucous membranes
• Butyl cellosolve, found in many all-purpose and window cleaners,
may damage your kidneys, bone marrow, liver and nervous system
• Triclosan, the active ingredient in most antibacterial products, not only kills bacteria,
it also has been shown to kill human cells

Are You Disinfecting Your Way to Poor Health?

In an ironic twist, while you’re disinfecting your home to keep your family safe,
you may actually be causing them harm.

If a child is raised in an environment doused in disinfectant soaps and cleansers,
given antibiotics that kill off all of the good and bad bacteria in their gut,
and kept away from the natural dirt, germs, viruses and other grime of childhood,
they are not able to build up resistance to disease, and they are vulnerable to illnesses later in life.

This theory, known as the hygiene hypothesis, is likely one reason why many allergies and immune-system diseases have doubled, tripled or even quadrupled in the last few decades.

For instance research has shown that 10 percent of children born into families who used cleaning products
such as bleach and carpet cleaners were twice as likely to battle wheezing problems
than those who were exposed to cleaning products the least.

Keeping Your Home Clean, Safely
I strongly encourage you to think about ditching all of your chemical disinfectants,
including your antibacterial soaps, laundry detergents and bath and kitchen cleansers,
in favor of more natural alternatives.

Why?
Because no study has shown that a vigorous program of home disinfection
leads to a reduction of illness in a family.
Yet, studies have shown that disinfectants can cause you and your family harm.

For those times when you need to do a bit of cleansing,
one of the best non-toxic disinfectants is simple soap and water.
You can use this for washing your hands, your body and for other household cleansing.
Another all-purpose cleanser that works great for kitchen counters,
cutting boards and bathrooms is 3% hydrogen peroxide and vinegar.

Simply put each liquid into a separate spray bottle, then spray the surface with one, followed by the other.

In tests run at Virginia Polytechnic Institute and State University,
pairing the two mists killed virtually all Salmonella, Shigella, and E. coli bacteria
on heavily contaminated food and surfaces when used in this fashion,
making this spray combination more effective at killing these potentially lethal bacteria
than chlorine bleach or any commercially available kitchen cleaner.

Sunlight is another powerful disinfectant, and drying your laundry in the sun
is one of the best ways to save energy and wind up with fresh, clean linens and clothing.

So there’s really no need to expose your family to dangerous chemical disinfectants.
As an added bonus, aside from the health benefits,
using this type of natural homemade cleanser is much less expensive than commercial varieties 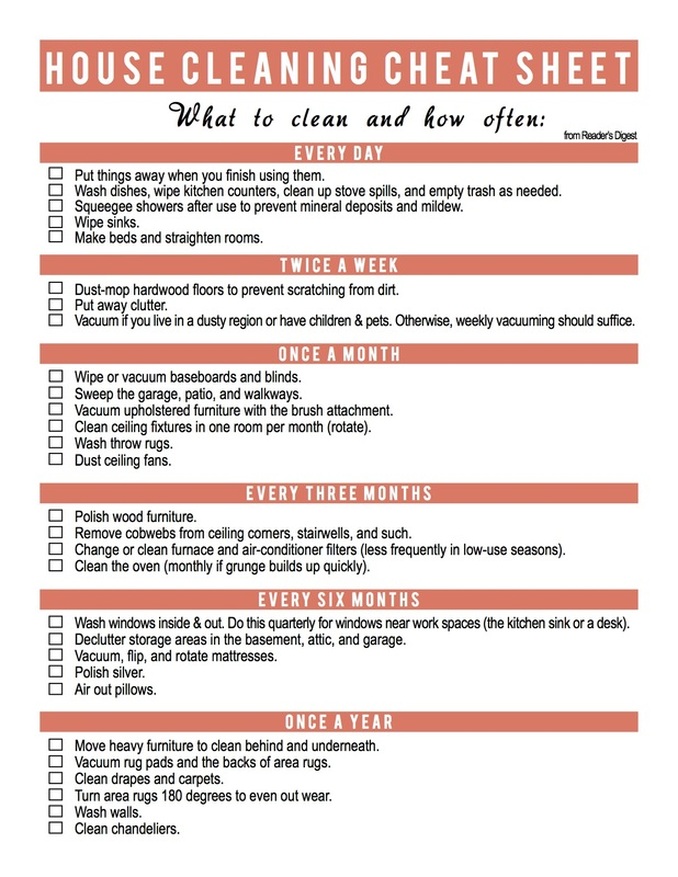 why tackle everything during one season? Why not spread it evenly throughout the I like the no-nonsense approach of this list.
Non-toxic cleaning.
When we talk about creating a healthier kitchen we want to get down to the very basics – the cleaning.
If you are using toxic chemicals to clean your counter tops or cutting surfaces, where you prepare your food,
you are exposing you and your family to toxic chemicals
that don’t belong in your home – let alone in your body.

To eliminate this risk, choose to use natural cleaners like
vinegar (which kills 99% of bacteria, 82% of mold, and 80% of germs -
according to Heinz company spokesperson Michael Mullen)
or safe brands like those below.
6. Safe detergents.
One cleaner that is often overlooked is dish detergent.
Much will be rinsed away, and there is definitely some peace of mind in that,
but we have to think of our hands/skin and lungs and also beyond our kitchens-
to consider the impact that we're making on the environment around us-
the health of the wildlife and vegetation in our area – and beyond.
A few simple steps for a big impact on the health of your kitchen and home environment!