~ Angie's Lovely Holiday ~
I have a friend called Angie, who lives in a Yorkshire town
She went on a little holiday, to Scarborough she was bound
'Tis nestled by the ocean, within a pretty bay,
Angie sent the photos, to share with you this way
She goes there with her hubby, to walk on sandy shores,
They wandered in the gardens, in the flowers she adores
They went to pretty cafe's, drank tea with buttered scones
Climbed on rocky outcrops and walked pathways far beyond
Angie loves the seaside, the balmy breezy beach
Angie loves her holidays, the gifting of the peace.
Soft whispers from
Derry's Heart Poems © 2011
'Scarborough'
Scarborough,......... oh! how I do love thee,
your tastes, sights, sounds, sands, and the smell of your sea.
Oh! How I do love thee,......more than I love me,
you bring out in me the best, the same with everyone else, you meet and greet,
Giving my mind, my heart, my soul, my body a well deserved rest,
a bit of all alright, (we say 'alreet' in Yorkshire, I must confess) 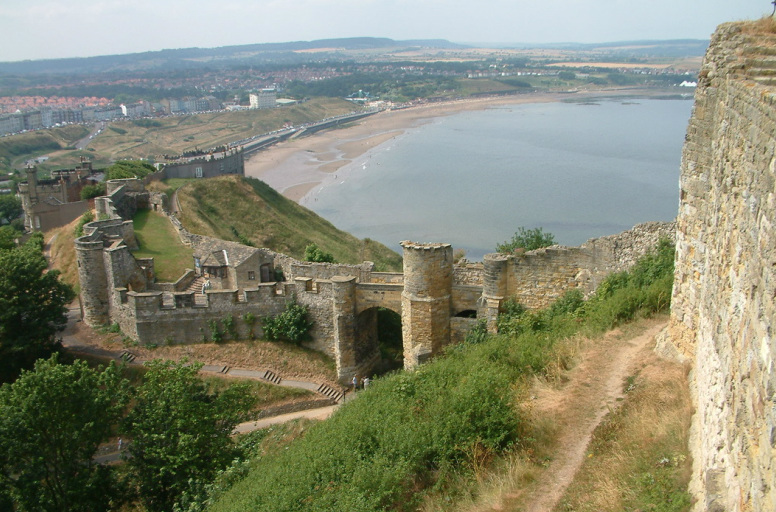 Scarborough castle looking out over the North bay © Angie 2006

Scarborough is a town on the North Sea on the east coast of North Yorkshire, England.
The modern town lies between 3 - 70 m (10 - 230 ft) above sea level,
rising steeply northward and westward
from the harbour onto limestone cliffs. The older part of the town lies around the harbour
and is protected by a rocky headland.

With a population of around 50,000,[1] Scarborough
is the largest holiday resort on the Yorkshire coast.
It is home to residential communities, business, fishing and service industries,
plus a growing creative economy.
Scarborough North Yorkshire from Cliff Street Scarborough
won the 2008/2009 award for the most creative and inspiring entrepreneurship initiative in Europe,[2]
and was also the most enterprising town in Britain in 2008.[3]
Wikipedia/Scarborough,_North_Yorkshire
middle click
1. Scarborough map, Yorkshire UK
2. A Week In Scarborough, North Yorkshire - video with Whitby castle ...
3. SCARBOROUGH 100 YEARS AGO
4. Yorkshire-coast Scarborough 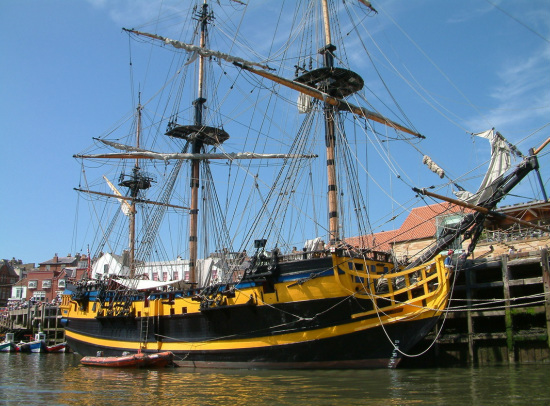 © Angie 2007
~ Early history ~
The town was founded around 966 AD as Skarðaborg by Thorgils Skarthi, a Viking raider,
though in the 4th century there had briefly been a Roman signal station on Scarborough headland,
and there is evidence of much earlier Stone Age and Bronze Age settlements.
However, the new settlement was soon burned to the ground
by a rival band of Vikings under Tostig Godwinson,
Lord of Falsgrave, and Harald III of Norway.
The destruction and massacremeant that very little remained
to be recorded in the Domesday survey of 1085. Scarborough recovered under King Henry II,
who built a stone castle on the headland, and granted charters in 1155 and 1163,
permitting a market on the sands, and establishing rule by burgesses.[5]
Edward II gave Scarborough Castle to his favourite, Piers Gaveston.
In his castle at Scarborough, Gaveston was besieged by the barons,
captured and carried to Oxford for execution. 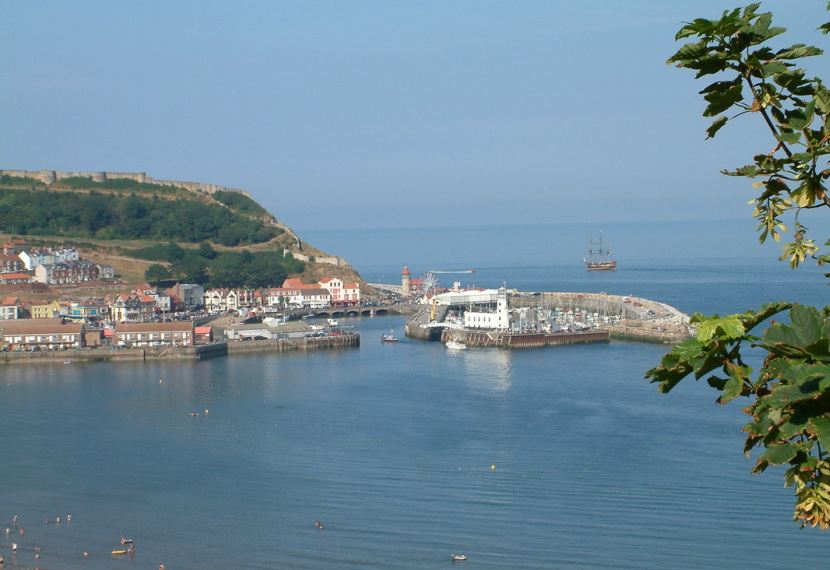 The South Bay was the site of the original early medieval settlement and the harbour,
which form the current Old Town district.
This remains the main focus for tourism,
with a sandy beach, cafes, amusements, arcades, theatres and entertainment facilities.
The modern commercial town centre has migrated 440 yards (400 m) north-west of the harbour area
and a 100 feet (30 m) above it, and contains the transport hubs,
main services, shopping and nightlife.
The harbour has undergone major regeneration including the new Albert Strange Pontoons,[4]
a more pedestrian-friendly promenade, street lighting and seating.

Scarborough Train Station
Scarborough is served by Scarborough railway station,
with services from York, Leeds, Manchester and Liverpool on the North TransPennine route
and from Hull via Bridlington and Filey on the Yorkshire Coast Line.

The most striking feature of the town's geography
is a high rocky promontory pointing eastward into the North Sea.
The promontory supports the 11th century ruins of Scarborough Castle
and separates the sea front into a North Bay and a South Bay.
The North Bay has traditionally been the more peaceful end of the resort.
This is the south bay, from the castle 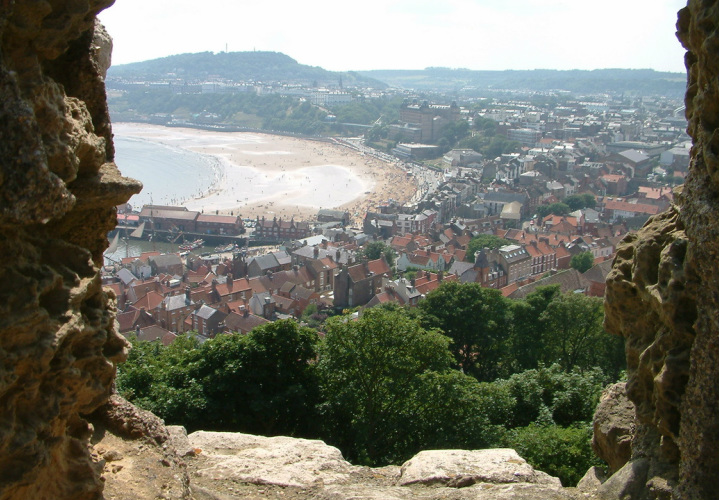 The North Bay - the more peaceful end of the resort
has 1. Scarborough's famous Sea Life Centre
2. British attractions-Sealife Scarborough
and is home to Peasholm Park an oriental themed municipal park
located in the seaside town of Scarborough, North Yorkshire, England.

which in June 2007 was restored to its Japanese-themed glory,
complete with reconstructed pagoda.
The park still features a mock maritime battle (based on the Battle of the River Plate)
re-enacted on the boating lake with large model boats
and fireworks throughout the summer holiday season. 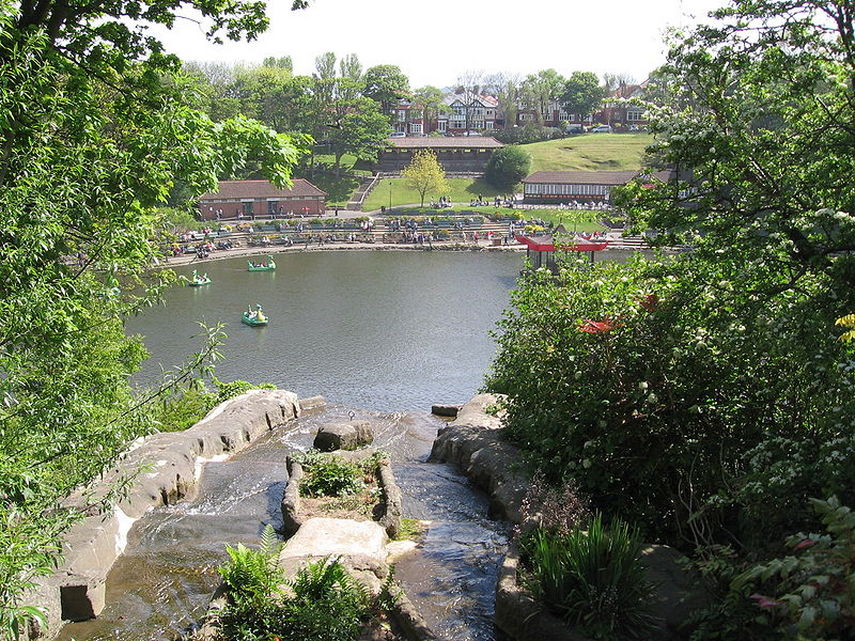 Peasholm Park © Keith D 2008
The park is on the site of a medieval manor house of Northstead
which was part of the Crown Estate from the 14th century.
By the beginning of the 20th century the area was open land used for farming and as allotments.
In 1911 Scarborough Corporation bought some land called Tuckers Field
from the Duchy of Lancaster to create a public park.
It was the borough engineer, Harry W Smith,
who had the idea of setting out the gardens in Japanese style.
Japanese style statues in the park were purchased from Killerby Hall
and exotic shrubs and flowers
were imported from the home of a local retired banker
who was living in the French Riviera.
middle click ~Wikipedia/Peasholm Park

In This Garden
there's
a silence
in the shadows
from the grey statue,
cold and alone, standing in
morning dewdrops flowers opening
their faces turning....upward to the sun,
birds keep fluttering, from branch to branch,
frogs are leaping ponds.. eyes peering in the moss,
there is silence, yet there is softest music, in this garden
from the zephyrs... whistling through the swaying trees.
There is beauty in this garden pretty blossoms laughing
in their glee, fireflies dancing in the misty sky, water
coursing in the stream, cool to touch, refreshing
to the feel.. a wonderland in this garden,
where you can bring your memories
and cherish them to keep.
There's wild animals,
carved from wood, with eyes,
there's wild animals in the woodlands
where cute ducklings & white goslings waddle by,
as my friends, I stroke and I feel their rippling strength
There is a dragon in this garden, breathing fire and smoke,
if, I close my eyes tight, I can imagine, as I sail the wooden boat,
red and green and gold, I float. ..there is wonder in this garden,
I find it as I walk, I feel the velvet petals, and I look up to the sky
I see my Jesus smile..... His eyes twinkling, for I am happy,
here in His pretty garden....in the loveliness He made
I hear His willows weeping & His water lapping
I look upon His mountains, I feel safe.
There is peace within His garden
I feel the warm sunshine too
it ripples on the stream
I am still, I listen
and I
whisper
'thank You'
Soft whispers from
Derry's Heart Poems © May 2011

Middle click for video of the Battle  ~ Visit Scarborough/naval-warfare
Peasholm Park is a haven of tranquillity in North Bay –
unless the battle ships are taking pot shots at one another!
At times during the summer season, war breaks out on the Lake
when 20ft replica boats recreate the tensions of a battle at sea.
For more than 80 years the “Battle of Peasholm” has been played out for 30 minutes
three times every week during the summer season
“It is of course the smallest manned navy in the world!”
Gunfire and smoke fill the air, and the aircraft drop bombs from above.
People flock to watch the Battles, mentioned in newspapers around the world.

Peasholm Park
opened in 1912 and became a favourite venue for galas, displays and exhibitions.
The park was extended to include Peasholm Glen, a natural ravine, in 1924.
Attractions include an artificial boating lake, where the mock naval battles are staged,
a putting green, The Garden of Tranquility with a champion tree walk. 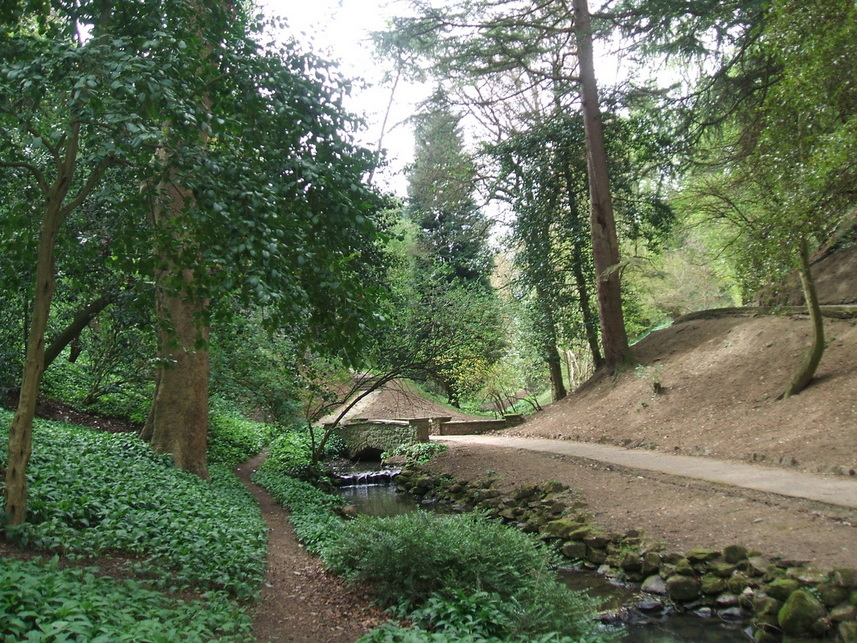 ~ I Cannot ~
Some things I cannot do, without another  thought of you
I cannot walk a garden path, without feeling all you would impart
I cannot look upon the stars, in dark of night, without seeing you within my sight
I cannot make a cup of tea, without imagining you here, as close can be
I cannot drop my eyes in prayer, without thinking of you over there
I cannot walk the sands of time, nor feel the wavelets on the shore
Nor wake within the mornings rays, without praying for you more
I cannot twirl an autumn leaf within my outstretched hand
without wondering, how much, you too would understand
I cannot touch your soul, as God the Father will
But I will always pray, His love your heart may fill

My friend took hold my hand, and said, come walk with me,
We'll travel down this winding path, that only we can see.
None knows where it will lead, we're in God's loving care,
He blesses us with friendship, eternal love to share.
We pause to rest a while, upon a cosy bench,
With so much to catch up on,  that words can never quench.
Our talk dances in the air, like gossamer sweet kiss,
Velvet in such richness, moments of shared bliss.

Golden tea in clear glass mugs, steam sweet aroma in the air,
Teddy fluff, all sorts of stuff, newsy bits to share.
My dear friend is like a book, with tender preparation
many chapters there to look, may there be no  sad conclusion.
So our tune of loving friendship, plays a never ending song
Sad notes and happy ones, for two to play along.

With my friend I share a secret, an opinion, grief or laugh,
A silence never matters, while we enjoy the path.
There's much we need to do, so we always have to part,
Separated by time and place, but we stay close in heart. 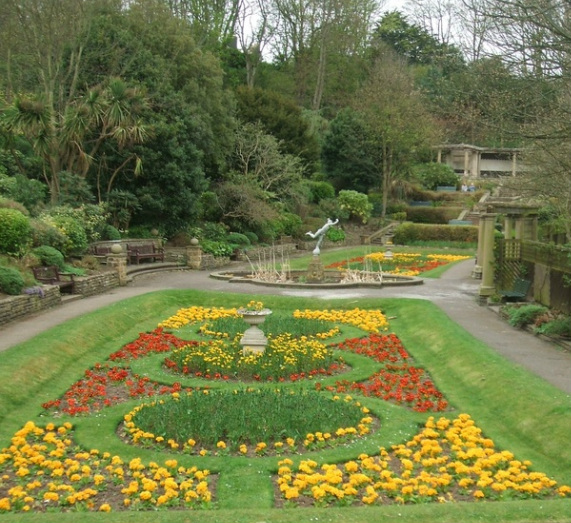 It's raining pretty petals, it's waterfalling joy
Let's lay among the fragrance
gazing to the heavens
from this lovely vantage point
then up we'll get to trek, that path around the bend,
to see what we can see
because we're best of friends and there we'll talk and walk
and then we'll talk some more...
until it's time for tea
`blossoms`