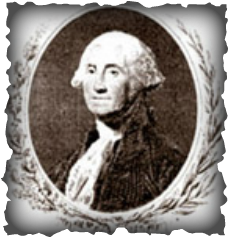 George Washington -P 1789-1797
on the Third Monday in February
Until the mid-1970s, the February 22 birthday of George Washington, hero of the Revolutionary War and first president of the United States, was a national holiday.
In addition, the February 12 birthday of Abraham Lincoln, the president
during the Civil War (1861-1865), was a holiday in most states.
In the 1970s, Congress declared that in order to honor all past presidents of the United States, a single holiday, to be called Presidents' Day, would be observed on the third Monday in February. In many states, however, the holiday continues to be known as George Washington's birthday.
Portraits of the Presidents and First Ladies (Library of Congress)
Wikipedia/Presidents_of_the_United_States
A pictorial look through the years with Mr. Billy Graham,
who has met with — or ministered to — every U.S. President since Harry Truman in 1950.
Billy Graham and U.S. Presidents in Pictures 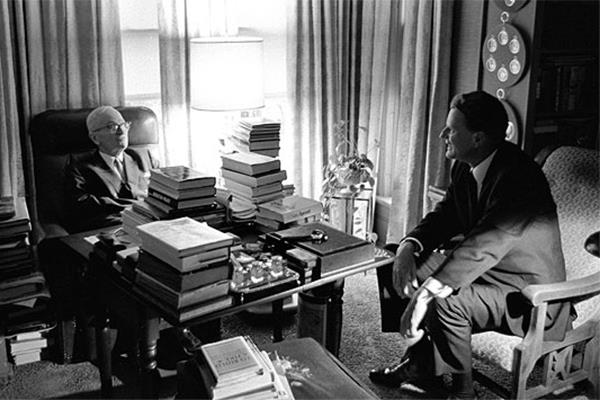 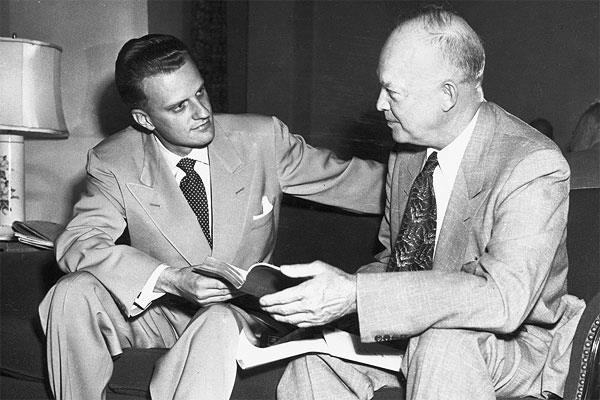 Dwight D. Eisenhower - January 20, 1953 January 20, 1961
"Eisenhower was the first President that really asked my counsel," said Mr. Graham.
February 18, 2013 - In honor of Presidents Day,
we would like to take a closer look at Billy Graham’s role in the lives of the men who held this office.
Michael Duffy, co-author of The Preacher and the Presidents:
Billy Graham in the White House, offers details about these fascinating relationships.
by Joy Allmond 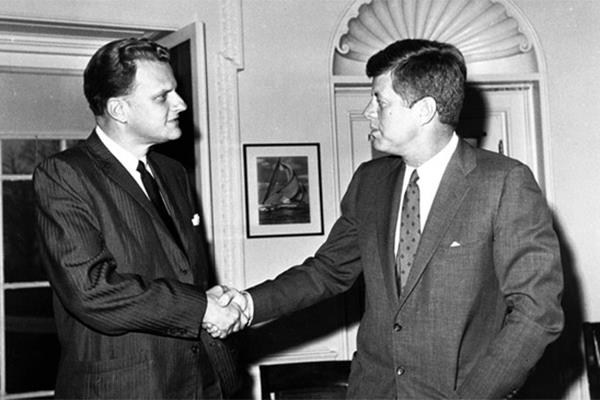 Meeting John F. Kennedy in the White House.
They knew Billy Graham was someone they could trust.
His friendship was a safe place for them.
—Michael Duffy 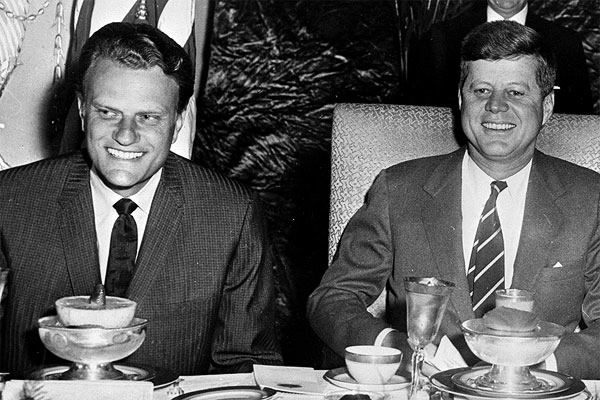 John F. Kennedy - January 20, 1961 November 22, 1963
With John F. Kennedy at the National Prayer Breakfast.
Michael Duffy, a 26-year veteran with Time magazine,
is currently the Washington Bureau Chief and Assistant Editor.
In his years with the magazine, he has covered the Pentagon, White House,
national politics, Congress and national security.
But among all the topics he has covered over the years,
few have fascinated him like Billy Graham’s relationships with U.S. presidents. 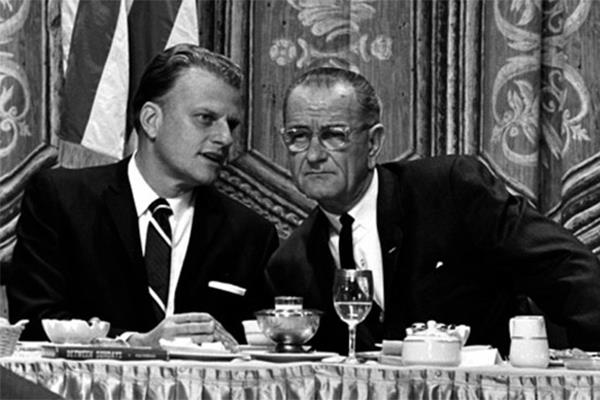 Lyndon B. Johnson - November 22, 1963 January 20, 1969
Billy Graham and Lyndon Johnson at the National Prayer Breakfast.
In 2007, he, along with Nancy Gibb, released
The Preacher and the Presidents: Billy Graham in the White House.
The book chronicles details of Graham’s relationship from Harry Truman through George W. Bush.
President Barack Obama has also visited Billy Graham at his North Carolina home. 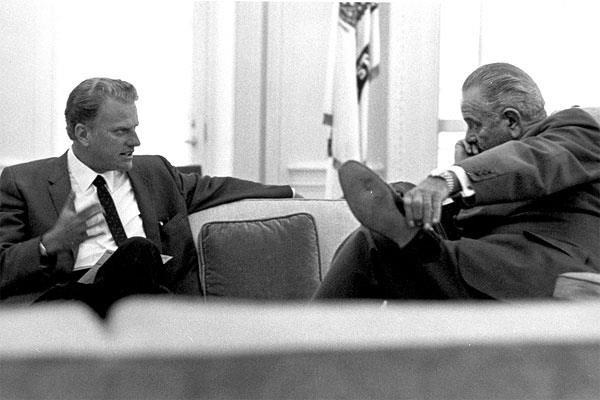 Lyndon B. Johnson (b.1908–d. 1973)
Mr. Graham often visited President Lyndon B. Johnson at the White House
EARLY FRIENDSHIPS
“There really is no one else in history who knew—much less ministered to--
11 consecutive presidents.
He worked hard at his friendships with them,” explains Duffy. 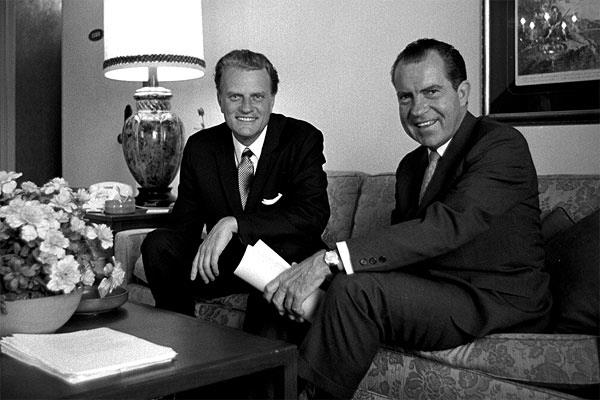 Richard Nixon - January 20, 1969 August 9, 1974
Mr. Graham and President Richard Nixon had a long friendship.
Sowing Seeds into the Hearts of Our Presidents 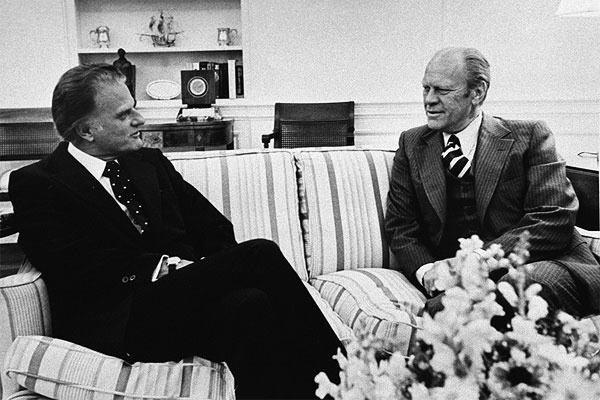 Gerald Ford - August 9, 1974 January 20, 1977
Mr. Graham visited President Gerald Ford at the White House in the mid-1970s.
“What really strikes me is that Billy Graham knew most of the presidents
before they were in the Oval Office.” 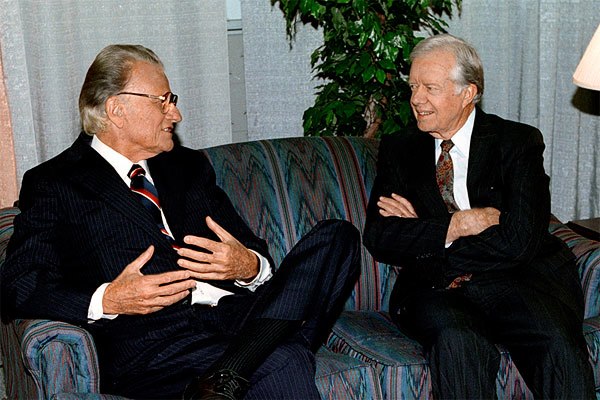 Jimmy Carter - January 20, 1977 January 20, 1981
Former President Jimmy Carter met with Mr. Graham privately during the 1994 Atlanta Crusade.
BEFORE THEY WERE PRESIDENTS: INVOLVEMENT IN BGEA
(BILLY GRAHAM EVANGELISTIC ASSOCIATION)
Jimmy Carter contributed—through service—to BGEA prior to his years in the Oval Office.
Carter began reading Graham’s books and listening to his sermons long before he was elected.
In 1962, he was even involved in the organization of a Crusade in Southwest Georgia. 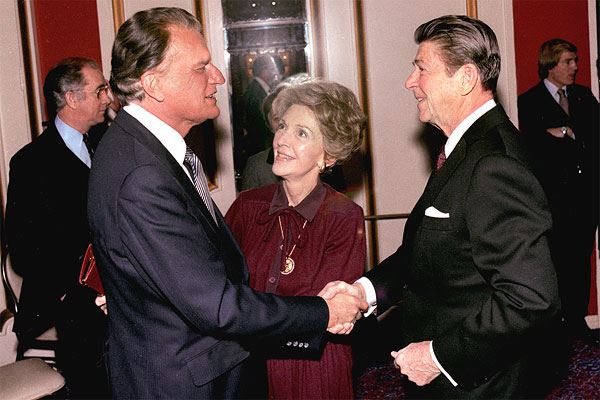 Ronald Reagan - January 20, 1981 January 20, 1989
Billy Graham knew President Ronald Reagan since the year he married Nancy.
One example of these pre-presidential friendships is the one he shared with Ronald Reagan.
Graham first met Reagan in the early 1950s, around the time that he and his wife Nancy married.
Their paths crossed again in the mid 1960s when Reagan served as the Governor of California.
This time, the interaction was of a more serious spiritual nature.
It is during that time that Ronald Reagan is believed to have tremendously grown in his faith. 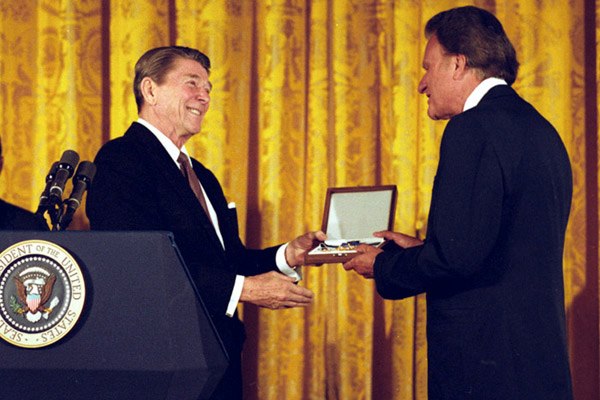 Ronald Reagan (b. 1911–d. 2004)
President Reagan presents Billy Graham with the Presidential Medal of Freedom.
“He knew these presidents needed support, regardless of politics.
Everyone has a great capacity for sin, but when you are the president of the United States,
you have so much power, and that means you have more reasons to be driven to your knees.” 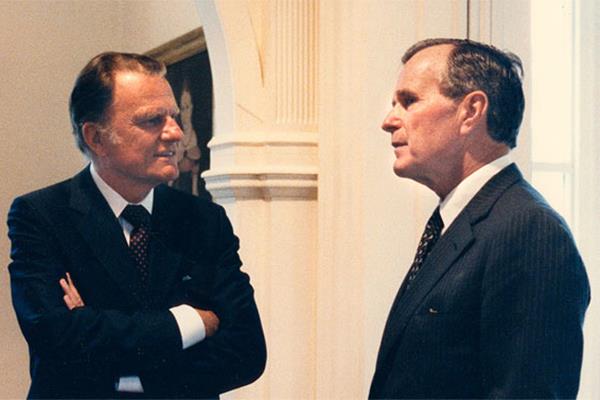 George H. W. Bush - January 20, 1989 January 20, 1993
Mr. Graham visited President George H. W. Bush in 1991 at the White House.
“These meetings were far more than photo opportunities.
In fact, many of the most important meetings between Billy Graham and the presidents were private--
the ones that mattered are the ones that we didn’t know about,” said Duffy.
“They knew Billy Graham was someone they could trust.
His friendship was a safe place for them—almost sacred.
They knew that their conversations would remain private.” 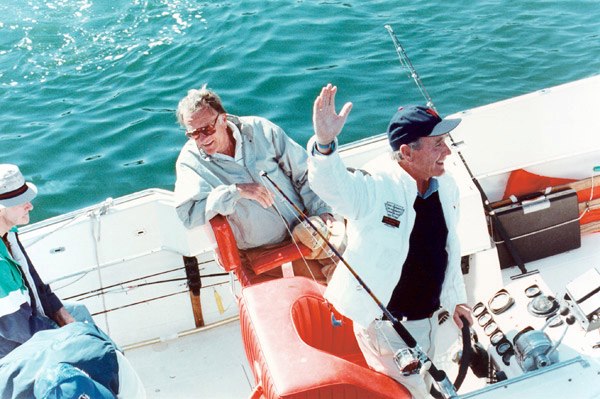 George H. W. Bush (b.1924)
Billy Graham and President Bush enjoy fishing off the coast of Maine.
What spoke volumes to these presidents—along with those watching--
is Graham’s friendship with the presidents, regardless of their political positions. 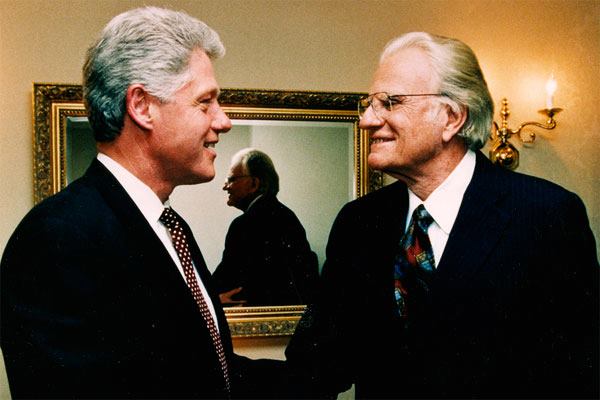 Bill Clinton - January 20, 1993 January 20, 2001
President William J. Clinton was 12 when he first heard Mr. Graham preach in his home town in Arkansas.
Duffy tells the story of 12-year-old Bill Clinton from a small town in Arkansas who regularly gave some allowance money to BGEA. BILLY GRAHAM EVANGELISTIC ASSOCIATION
It was this same boy who, around that time,
begged his Sunday school teacher to take him to War Memorial Stadium in Little Rock
to attend a Billy Graham Crusade in the late 1950s.
This happened to be an occasion where Graham agreed to come on one condition:
that the crowds be de-segregated.
A few years later, as a young man, Clinton took his then-girlfriend, Hilary Rodham,
to a Crusade in Oakland, Calif., for a date. He wanted her to hear the preacher he so loved as a boy. 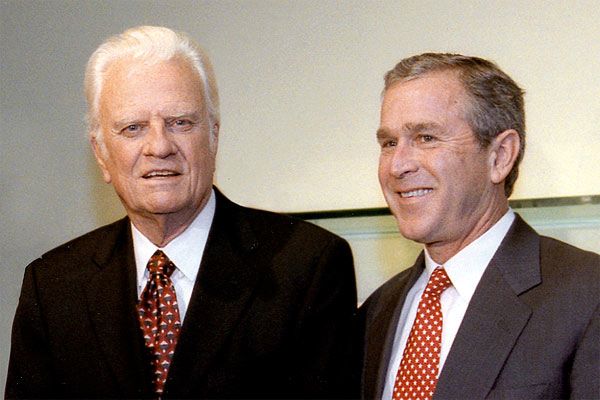 This is but one example of Billy Graham’s investment into the lives of our presidents,
as he sensed the pressures of the office and had compassion for these men. 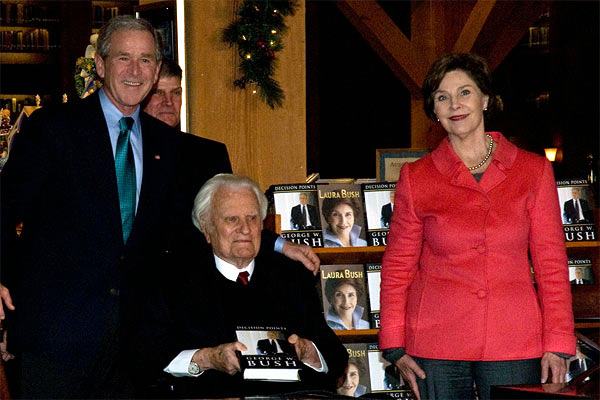 George W. Bush - (b.1946)
Mr. Graham joined George and Laura Bush
as they signed books at the Billy Graham Library in December 2010.
In Graham’s friendships with the presidents,
the love of Christ was his motivation as he loved them and ministered to them through war,
scandal and hardship. May we as a nation bear the fruit of the Gospel seeds
sown into the hearts of our presidents by Billy Graham.
Billygraham.org/articlepage/Presidents day 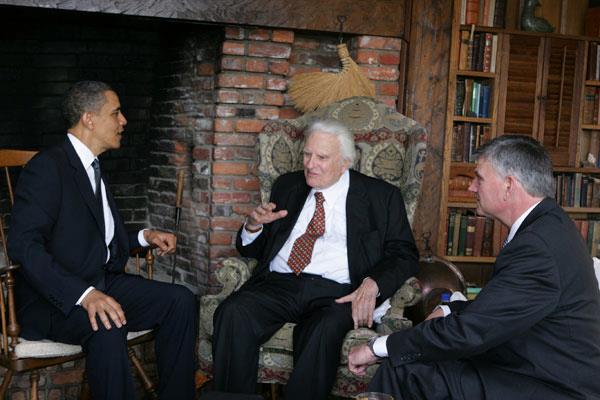 Barack Obama - January 20, 2009 Incumbent
President Barack Obama visited Mr. Graham (and son Franklin) at home on April 25, 2010.
President Obama Meets with Billy Graham
April 25, 2010
Billy Graham issued a statement after meeting with President Obama today at his home:
"I am pleased to have had President Obama in my home this afternoon," said Mr. Graham.
"He requested a meeting since he was spending the weekend nearby in Asheville.
My son Franklin and I enjoyed a brief visit with the President, followed by a time of prayer together.
"As we approach the National Day of Prayer on May 6," Mr. Graham added,
"I want to encourage Christians everywhere to pray for our President, and for all those in positions of
authority, and especially for the men and women serving in our military."
Mr. Graham has met with every U.S. President since Harry Truman
Billygraham.org/articlepage.956 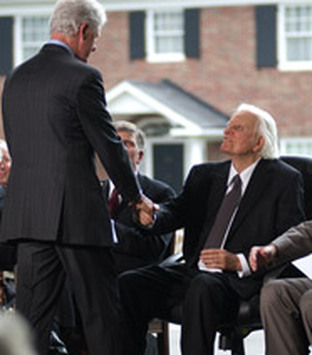 November 8, 2012 was Billy Graham's 94th birthday.
Dear Billy Graham:
I love you for being a man who believes that all men are created equal, just as God says.
My mom told me from an early age that you love all men,
and that you tried to help Martin Luther and President Kennedy. I love you much.
David King
God has used you greatly, Billy Graham, and I know it is because you made yourself available to Him.
I hope He continues to bless you in this life, and that we will get to meet in heaven someday.
Cheryl A. Fenn
He loved the Lord and poured his heart out for all mankind, just as Jesus died for all mankind.
Joyce Jensen 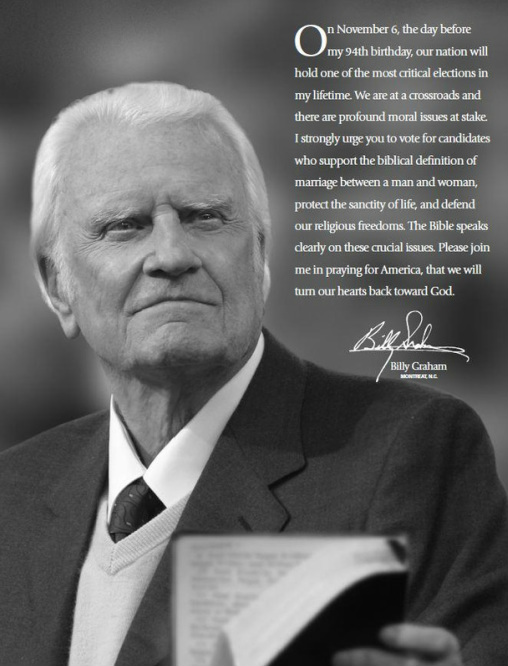